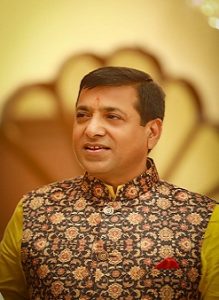 Mr. SHRIPAL RAJ LODHA, a self-made and visionary business leader is the Chairman of “UMA GROUP OF INDUSTRIES”, one of the leading flexible packaging companies in India clocking an annual turnover of US$ 75 Million.

Entrepreneurial by nature and blessed with an ability to see the ‘bigger picture’, Mr. Lodha is a 1st generation entrepreneur who has orchestrated this venture from scratch by overcoming complex business challenges & making high-stake decisions using experience backed judgment, strong work ethics and irreproachable integrity.

Mr. Lodha’s vision was to build a business model that can command enormous goodwill in the industry and get recognized for its consistent high quality & services. In his career spanning 27 years, Mr. Lodha has elevated UMA Group to the Top Position in the Flexible Packaging Industry by setting up various Industrial units in Abu, Jodhpur & Mogra (Rajasthan). He holds the distinction of setting up State-of-the-art Manufacturing Unit spread over 20 acres with Ultra-Modern Technology & Equipment’s along with a team size of 1200+ members.

Mr. Lodha strongly advocates the concept of 'Customer First' and holds an excellent track record of interfacing with clients to understand their requirements and provide services that create value and maximize profitability. Being an agile athlete, Mr. Lodha has generated competencies in identifying & tapping profitable business propositions and working on new development plans in domestic as well as international markets of Nigeria and Singapore.

Under Mr. Lodha’s astute leadership, the UMA group recorded an exponential growth of Rs. 3800 Million in FY 2013-14 which was a result of his ideology in providing quality products and services. Always the visionary, Mr. Lodha harnessed technology by setting up state of the art machinery and invested in building a technically sound, qualified & efficient team. He single-handedly achieved major breakthrough orders from large accounts such as PepsiCo, Britannia, Nestle, Tata Global Beverages, Tata Chemicals, ITC, Perfetti, Parle and Bikaji.

Mr. Lodha’s proven track of success & accomplishments is backed by numerous professional appreciations and he has been bestowed with awards and honors such as:

A dedicated philanthropist, Mr. Lodha has been actively involved in a spectrum of social welfare & voluntary activities such as:

Mr. Lodha is also a firm believer of corporate governance which means that the 1200+ workforce experience impeccable working conditions that have set benchmarks for other companies in the packaging sector. Whilst his contributions in the corporate world as well as his initiatives in CSR activities have earned him respect from various quarters, he strongly believes in the act of Karma.
“Even if things don't unfold the way you expected, don't be disheartened or give up. One who continues to advance will win in the end.”