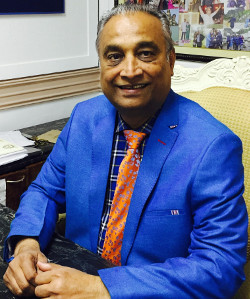 Mr. Dalpat Lodha has achieved a coveted rate of growth since its inception and was awarded the status of the Highest Export Award Trophy (to Non Quota Countries) for the year 1992 and third position in the year 1991 and in 1995 award "Yuvak Ratan" awarded by Akhil Bhartiya Terapanth Yuvak Parishad. Year 2004 "Bhartiya Udyog Ratan award and Rajiv Gandhi Shiromani Award, Year 2007-08, 2009, 2010-11 "State award for Exports Excellence 15t Position" by Government of Rajasthan. Also Award of Excellence for Highest Exports to Japan from last two years 201516 & 2016-17 awarded by Apparel Export Promotion Council of India.

As Managing Director of " The Lodha Group" of Industries, his vision, acumen and sprite of adventure, he has brought best quality product to the group making it one of the largest Garment Manufacturers in India..

Human blood is an essential element of human life with no substitute to aware all persons as Mr. Dalpat Lodha organized "BLOOD DONATION CAW" every year in September and is the most successful, creating a record of collecting units of the blood.