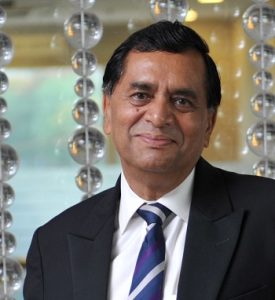 Mr. Ashok katariya’s journey is an inspiring story of determination and visionary approach. Hailing from a humble family, he studied and worked together and completed his Civil Engineering as a Gold Medallist from College of Engineering Pune.His determination to pioneer into challenging sectors has built the success story of the Group. Currently Ashoka is active in over 12 sectors. Ashoka Buildcon Limited, the flagship company of the Group is among the leading highway developers in the country and has an experience of working in about 18 states across the length and breadth of the country.

Despite being highly successful in all his business ventures, Mr. katariya has kept his dream alive of building a world-class education environment for the next generation. With an ultimate aim of building one of a kind University in India, Ashoka Education Foundation is today nurturing 5000 students in its schools and colleges. He is actively involved in Veeraayatan where he has been entrusted with the responsibility of setting up schools for the underpriviledged across India. He is also focusing on building a greener tomorrow through Ashoka Bio-Energy research initiatives. Soon the Group will be launching a 300 bedded super speciality hospital in Nashik, which would be the largest of its kind in North Mahrashtra.